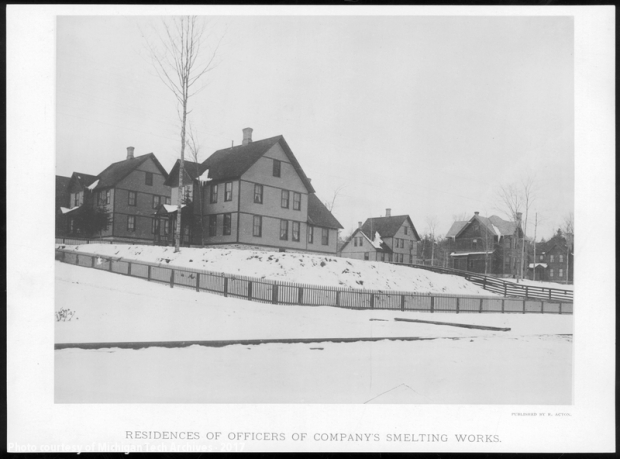 Add to Shoebox  View Your Shoebox  User Login
Title: Buildings - Houses - Lake Linden
Photographer: Unknown
Subject Headings: Buildings - Dwellings - Housing, Single Family, Seasons - Winter, Woody Plants - Trees
Condition: Good
Description: Residences of Officers of Company's Smelting Works. [Several similiar looking houses surrounded by a fence.]
Source of Description: Front and back of Photo [Cataloger]
Institution: Michigan Technological University Archives and Copper Country Historical Collections
Donor: E. G. Ziegler
Date of Photo: undated
Medium: still image
Color: black and white
Size: 21.3 cm 30.2 cm
Polarity: Positive
Image No: No Neg 2008-02-04-06
Collection Name: Copper Country Photograph Vertical File
Terms of Use: Rights to reproduce and distribute this image may be restricted. Contact the Michigan Technological University Archives and Copper Country Historical Collections for further information.
User Comments:
• I think that one of these houses is the house I grew up in, too. It's the second one up. The first house was gone by 1965. That lot and the lot beyond - closest to the highway - were all sold as one yard with the second house. The Gilberts/Jilberts - of the dairy - owned this house when we bought it from Mrs. Jilbert in 1965. It had a bay window on the east side of the house in the sunroom that went up, also, to the master bedroom. There was a wrap-around porch along the front and half of the east side. The foyer, salon, and sunroom had pocket doors that separated them. The butler's pantry was enormous, echoed upstairs in the master bedroom as a very spacious walk-in closet with a built-in dresser. Three of the bedrooms had built-in dressers. One was a linen closet, the other two were in the bedroom closets. Two stairways - one main, one for staff. It had three bedrooms, one maid's bedroom, a huge bathroom, a walk-in linen closet, a walk-up attic, a foyer, big staircase, a staff staircase with a closet and then a tuck-through room under the stairs, a parlor, a butler's pantry, a dining room, and an enormous kitchen. The walk-up attic had very high ceilings, so the rooms were very usable. Mr. Jilbert was such an avid gardener that he forced tulips every winter for Mrs. Jilbert for Valentine's day. Sigh... He planted plum trees, ferns, birches, rosehips, blackberries, raspberries, poppies, - everything. I loved - still love - that house.
2018-12-27 - 21:32:00 by Maeb H
• I had forgotten... there was a garage that was built in the second (middle) yard. It was a three-bay garage - perfect for my dad's second car and a canoe. There was a walk-up attic there, too. But, the wires there were live, so we were barred from playing up there. At the bottom of the hill was a small run-off pond - toxic - that we skated on. Our hill - the street was called Lakeview then - was excellent as a sledding hill. We would have kids stop traffic on M26 so we could sled down, slide across the highway, and screech a hard left turn into the smelter's fence. And all the woods between Hubbell and Lake Linden. The old Benedict Field was still there. A mammoth drainage pipe was easily gone through to get past the locked front gate. The old clay tennis courts were also still in fairly decent shape. It was a wonderful place to grow up.
2018-12-27 - 21:55:00 by Maeb H
• This is my dad's house, and you're right about the location. Most of the fence is gone now, but pieces of it are still in place. You'll notice a garage put in place last year on the hillside now.
1/22/2009 1:24:41 PM by Anonymous
• This looks like the corner of 19th street and M26 in Hubbell, directly accross M26 from the C&H smelter works.
3/9/2008 11:03:22 AM by Anonymous
Please login if you would like to comment on this image.